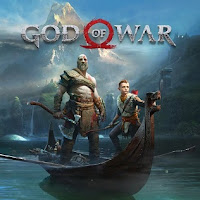 Can´t really say I was a hardcore fan of the God of War series, but I did play a bit most of them. The PSP ones were my favorites and afaik the only ones I completed. When I was working at Crytek I heard about the reboot and the viking theme. Intriguing. When the game was finally released a hype wave took the media, which quickly labeled it as the Game of the year. In these situations I always feel skeptical

Some months later a workmate lend me his copy and I finally had the opportunity to play it a bit. Also, at that time the other game I expected to be the GotY (Dead Red Redemption 2) had been released, and somehow my perception of GoW changed for the better: Now I don´t have a problem in considering it the game of the year. Partially because I liked some of the risks/solutions they took, but also because - much like Atreus is for Kratos - RDR2 was a major disappointment to me

On the plus side they successfully brought new life to a semi-stagnant IP. Norse mythology offers a lot of possibilities for future games, and they have barely scratched the surface (i.e. Odin/Thor are only mentioned). They have also turned the anger-driven Kratos into a believable character and introduced a richer relationship with those around him, particularly his son Atreus

The camera work is also remarkable, since the whole game is displayed as a one-shot sequence (including cutscenes). And being a completionist/collectible fan myself there are lots of items to find/sniff around the scenarios for. Visually speaking the game plays very well with the sense of different dimensions (you often feel very small compared to the magnitude of the scenarios), something already present in the Greek setting but less impactful due to the more-distant camera

On the not-so-great side I don´t think the combat is better. It´s different and it works, but I miss the sense of being a kill machine from the previous titles, and the 3rd person camera often hides enemies attacking from the back. The plot does have some interesting twists but I´m still not totally sure why Baldur is fixated on Kratos, and I feel most of the world trips I´m forced to are not motivated by character development but because the level designers needed excuses to move me around the map

Aside from that I felt some of the encounters were poorly balanced. I had less issues killing the final boss than some of the minions (particularly elves and revenants). Some more checkpoints would have helped. On the world side the metroidvania gates I found along the way didn´t do a great job in telling me "don´t bother now, you need a future ability for this". Also the teleport options didn´t seem close enough to promote more exploration (at least for me)

I frankly didn´t feel like finishing the game. I had a feeling I had seen all that needed to be seen when I was 50% through, but eventually I forced myself to complete it. I don´t regret it, but I don´t see it as a memorable experience. It´s great at times, but overall I think there are areas to improve that make me think the sequels might be better

Still, I don´t see any other game this year taking so many risks and succeeding as often as God of War does, so to me is a fair winner of the GotY title
Posted by Alvaro Vazquez de la Torre at 1:46 PM No comments: