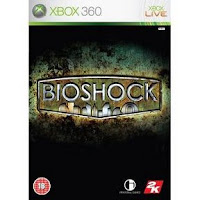 Undoubtely one of last year's most important games, essentially Bioshock is a console FPS, but there are also lots of RPG elements.

The story: Late 50s. Your plane crashes right at the entrance of a secret underwater city in the middle of the Atlantic. It was built by a group of visionaries after the second world war, and it was populated by scientifics and artists trying to build a better world. Their experiments on genetic engineering eventually turned the paradise into hell. You're supposed to be helping one of the survivors to rescue his family, but things are not always as they seem to be...

I personally bought it attracted by the good reviews and its original setting: That secret city below water was misterious enough to make me wish to explore its secrets. And god knows there are many of them.

My personal opinion is that there are just too many of them. And I really mean A LOT. I've always been in favor of combining one core mechanic with 2-3 supporting mechanics (which is too much for many designers) but Bioshock simply exceeded my expectations.

The basic mechanic is the shooting trade-off (with no aiming helps as far as I could see), but you unlock certain genetic improvements allowing alternative gameplay, such as freezing enemies, setting them on fire, sneaking, hacking turrets and security devices, use the environment electrocuting water areas, use 'the force' to attract objects to be thrown or as shields...

Want more mechanics? There are more. You can also loot objects from bodies and crates to craft ammo and other elements. There are weapon upgrades to choose from, genetic upgrades to adapt the combat style to yours. You can take pictures of the enemies to increase your combat skills against each one. There is a basic (and eventually repetitive) puzzle game to simulate hacking, and vendors to get ammo and medikits (by the way, the health system is really hardcore).

And let's talk about the weapons. There are not a lot (6), but each one has 3 different types of ammo to be used against different enemies which in essence makes 18 weapons. I noticed it's difficult to select the proper one, since you don't have much time to think when you're attacked.

And there is also a huge exploration aspect: Players are required to spend time searching all desks and boxes if they want to have enough ammo at their disposal. I personally think it was too much. It's just not fun to be searching every prop in the game. Some of them are highlighted so you can see them from a distance, but most of them are inside desks and takes too much time to collect them. It was boring.

Players are required to manage several parameters: Player's health, player's mana (called EVE, allows to use those genetic superpowers), ammo, ADAM (the currency for genetic enhancements), crafteable elements and money. Am I the only one that thinks it's a little too much?

Ok, yes, much of the mechanics are optional. You don't really need to take pictures, snipe or even use genetic enhancements much of the time. But somehow I have the feeling that I'm not playing in the proper way if I don't use them all. Also, it had to be really painful to tweak all those mechanics properly. I know, that same studio created System Shock, and since both games share most of the design, they've already been there. But anyway I think they could have done a great game anyway without that many. Made me feel lost often.


Now for the level design:

I found it appropriate. The bulk of the game is based on objectives like 'Go to that unexplored area'. Once you're spotted enemies never stop chasing you, so basically you're forced to kill everything on sight. But it's fine, you've got lots of killing options to choose from, so combat was always challenging enough combined with the scenarios.

Small twists in the levels were common, making each scenario somehow unique: There is a escort mission, collecting objectives or a level in which all your genetic enhancements are taken away (for some reason there was not much ammo in that level, and it was really painful).

I remember one of my bosses in my previous company saying that unique settings cannot create a good game by itself. I think he was wrong, and Bioshock proves it. None of the game mechanics are really that original. The underwater city and the stories within are.

The most remarkable element of this game story is how the plot is embedded into the game environments. Players are provided with all information required for the missions by radio, but you can see the inner stories of the people who populated Rapture through the signs they left in the rooms, their works... it's a little like the human traces found in hidden places in Portal.

In order to provide some background stories you can collect audio recordings hidden in the scenarios. It makes sense since there are no 'normal' people populating the place, just enemies. I'm not particularly hot about these audio recordings, though. Most of them don't add much to the story, and they're often gameplay intrusive.

The genetic superpowers are (for my opinion) a little too unrealistic for the story. Let's see: One allows you to throw electric discharges, another one shoots fire bolts. Telekinesis works as 'the force' (attracting and repelling objects), another one allows you to turn enemies into ice statues for a short time, throw bees against enemies (I'm serious), create cyclons... I just don't buy it. Ok, once you get into the story (and particularly the gameplay) you live with it, but I keep thinking the story doesn't support that degree of magic.

To me, the best thing of the story is how it makes you feel you're really inside it. Music is excellent (old tunes from the late 40s), and sound effects are everywhere to give you the chills. Final boss encounters are carefully prepared by the storytelling, so you know the insane experiments and abuses they lead against innocent people.

One of the most remarkable features of the game is an ethical choice you're given: Little girls (named little sisters) wander around the scenarios protected by one of the toughest enemies, the so-called Big daddies. If you manage to kill these, you can either save or gather (kill) the little ones. The end of the game depends of that choice. I personally saved them all, so I gained access to the 'good guy' ending. The 'bad guy ending' is not bad either, you can finish the game with both of them.

I'd give it a 7.5. Bioshock is one of those games that I like because they clearly offer more content than I expected for my money. Despite some frustrating moments and too much time spent in the RPG mechanics, I had fun playing it and the storytelling is really compelling. I strongly recommend to any RPG gamer to try it, and particularly anyone interested in how games can tell good stories. This one does.
Posted by Alvaro Vazquez de la Torre at 10:23 AM No comments: