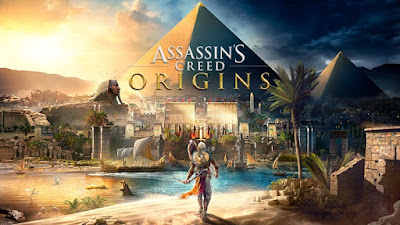 As it commonly happens to me, I played Assassin´s Creed Origins when it was released for like 60-70% of the content and got bored. Admittedly my playstyle fosters eventual abandonment since I´m kind of a collector and get obsessed with finding every little location/collectible the game offers, ignore main/side missions and at some point it becomes so repetitive I put aside the game

Normally 2-3 years later I get the urge to finish what I started and give a final push to complete the story. This time – since I had done most of the heavy lifting already – I went for the Platinum. In total, 75-80h of playtime

Overall is a good game. If you are into ACs I definitively recommend it. Maybe it´s just me, but having the possibility of exploring the ancient Egypt is very appealing, not to mention to climb all those monuments without tour guides threatening your life

On the plus side, as mentioned, the game world is super interesting. Having played previous ACs, I think the amount of player tools (weapons, player actions, gameplay decisions) is probably better balanced that other titles, which had maybe too many of them. Visually speaking it´s remarkable, and it definitively sells the fantasy that you are living at that time, with lots of little graphic details

On the minus side, the story is not memorable as it often happens in open world games. A pity, it basically tells how the creed starts and why. But since you can pause story development at will to wander around the world, characters and plotlines can easily fall into oblivion. Aside from that, you will find the usual “template content” commonly found in Ubisoft games, and most quests are mere excuses to turn you – an epic warrior – into an errand boy

I guess ACs are games conceived to make you play for months. I think at this point of my life I favor games that offer 10-15 of high quality gameplay over those asking you to devote half year to them. But that´s just me. Anyway I even got the platinum, so maybe it´s worth those 6 months of your life 😊