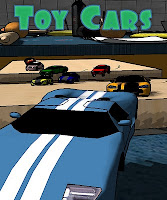 Barkley, a former Pyro colleague and friend has just finished a small indie game called TOY CARS. It involves a couple of single player modes and multiplayer for 4 users. Considering it was done by a single individual (including graphics), it's amazing.

Since I have the time and some experience about the subject (aside from designer I was also Grin Barcelona's press manager) I've been helping him with the QA, some design contributions and mainly Press issues. We've released a couple of press notes and so far the game is performing well (for the indie scene). Barkley is even thinking about a potential sequel.

Anyway, if you like racing games and you've got 1 euro (the equivalent to 80 MS in XBLA) I recommend it to you. More info in the company's website.
Posted by Alvaro Vazquez de la Torre at 1:14 AM No comments:

WHY ARE STORIES IMPORTANT FOR VIDEOGAMES?

Here is an interesting thought I recently had while playing Uncharted 2 and Super Mario Galaxy: Are videogame stories important because they interest you over the upcoming events, or because they create a common past with the player?

Let me explain this point: While playing Uncharted 2 I realized the plot was not interesting enough (as I explained in my previous post How they made a movie-like videogame) but nevertheless I wanted to keep playing. Why? Somehow I had spent so many hours with Drake and his problems that I was willing to end his story. I kind of felt like I owed that to him. Ain't that weird? It's like an old friend asking me for a favor: 'Ey, Alvaro, remember all that crap we went through in Istanbul? C'mon, old buddy, you can't abandon me in the middle of episode 12. I need to get to the end of this'.

On the other hand I still have to finish Super Mario Galaxy, and I bought it right when it was released. It's one of the best videogame designs I've played in years, but still I don't feel encouraged to finish it. I eventually will, but I'm not in a hurry. The lack of a story makes me feel like 'well, Mario is not really worried about the princess, why should I? we both know he'll rescue her sooner or later and frankly, our common experience together in the galaxies we've completed has not created a strong bond between us'.

Just a thought, but still it's kind of disturbing. I'll see in future games for more examples.
Posted by Alvaro Vazquez de la Torre at 10:59 AM No comments: