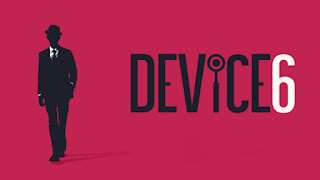 Highly praised by its text-based approach to puzzles, I purchased it some time ago, played for a little while and then abandoned it. Only recently I found the time to complete it

It´s not long, and it´s indeed a very fresh take on text adventures. The visual design is elegant and puts to the test the way you interact with your device (an iPad in my case): Screen rotation is a must, as well as using swipe with precision to find clues

I´m a bit torn since I generally value a lot originality, good graphic design and puzzles, but honestly I didn´t enjoy the game a lot. I had to use internet walkthroughs several times and that makes me feel stupid. Puzzles can only be solved in a certain way, and some of them are a bit obscure, twisted or even unfair (the clues you´re given may change depending on latter actions without telling you, forcing you to fall back often to see what changed in the scene)

I don´t want to sound negative, I think the way they approached the puzzles is part of the proposal. I presume they didn´t have the production manpower to make a long game so they deliberately chose to make puzzles complicated to secure a decent total playtime. It´s just that I like what I call “Hollywood challenges” – Like in movies, the main character (me) is given an apparently unsolvable problem... which can be overcomed in a matter of minutes

The story is intriguing and evocative, and I value the fact that some art forms (like this game) makes you challenge your concept of reality. We could use more of those

In summary, a great proposal. Not my time of game, but surely there´ll be a good number of people out there who will find it indispensable
Posted by Alvaro Vazquez de la Torre at 2:57 PM No comments:

Hidden in my Steam library it´s been waiting for months (years?) until I recently decided to give it a try. I´d be happy if I can finish all games I have, although it does sound like a fool´s errand…

Haunt the house is short (I finished it in 2-3 hours) and cute. You control a little ghost who can possess pretty much any object in the scenario. When possessed, these objects can play scary animations that will make human inhabitants flee from the place. Once you get rid of all of them, you beat the scenario. That, and the charming visuals, is pretty much the game

The game´s hook is the cute graphics and animations. They´re really charming and the possessions are varied and funny. I imagine the game was conceived by an animator / artist, and from that point of view they can say “mission achieved”. The game has visual personality, and watching all possessions becomes a goal for you

However the game has some deep gameplay issues. The worst of all is the complete lack of control over the NPCs: When you spook them, they tend to go around the place randomly except for where you want them to go. You eventually have to chase them across the place activating objects and see if they´ll eventually decide to go to the exit. I tried to understand the AI patterns that govern them, but failed. Maybe there are hidden “scared” bars making them behave differently depending on the level they´re at? Maybe also it depends if they´re adults of kids? Do different objects have different AoE ranges? No idea

Second issue (less important) happens when you´re controlling an object and play an animation: You have to wait until the anim ends, you cannot stop or cancel it. Very often you´re trying to chase up an NPC (see point above) and this slows you down for using the nearest object. I can imagine the creative direction of the title was in the hands of an animator, this “animation vs responsiveness” is a classic gameplay issue when designers are overridden by other disciplines

Third problem I´d mention is the lack of level design novelties. The game has 4 levels and they´re all essentially the same. There are no new mechanics added, no new challenges…  Just new cute animations to play. Again it looks like the game´s focus was on creating cute visuals and the basic “possess and spook” loop and that´s all. Thankfully the game is short, otherwise it´d have made itself repetitive fairly soon

Other than that, like I said, the visuals are really nice, and the spook animations are nothing but charming and funny. It truly deserves 1 hour of your time, but more than that… you´ll probably get bored
Posted by Alvaro Vazquez de la Torre at 1:52 AM No comments: 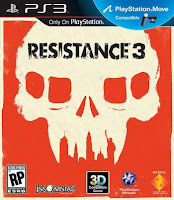 And here comes another PS3 game I didn´t really cared much, but got so cheap I thought "well, I´ll have to play it :)". I tried the first Resistance a bit as part of some game design research (I was working at Pyro at the time) and liked the concept but never felt it was distinctive enough from other shooters to make it truly unique

Resistance 3 creates the same reaction in the user. It is by all means a solid work of experienced developers, but from a high level perspective its unique selling points are not that special. This is mitigated by the superb weapon design, which eventually leads to a contradictory feeling of "I like what I´m doing, eventhough I don´t care much in the long term"

On the plus side, as mentioned, the weapons are extremely solid and satisfying. Seriously, Insomniac makes great weapon designs and this is no exception. Enemy abilities are interlinked with your own, creating a matrix of options for the player to be particularly effective against some enemies if certain weapon is used. When you nail this (and R3 does) the gameplay is always fun. On top of that the weapon progression system makes failure rewarding: You don´t feel you wasted time when dying, since the gun you were using leveled a bit in the process

On the so-so front, the story is a good-enough vehicle for you to move across the US chasing down baddies, and the graphics are acceptable but not particularly ground-breaking. The level design is ok as well, but I could have used more wow moments. The setting (an alternative 1950 US invaded by aliens) is distinctive enough to make you feel a bit curious, but I don´t think they exploited all possibilities it offers

On the minus side the game does a poor job of making you feel you´re doing something special. Everything is adecuate but not "oh my god I´ve never seen anything like this". The story creates the minimum motivation for you to move forward, but that´s all, and the whole game becomes a bit predictable in general

I had fun playing, though. A shooter with good weapon systems is always satisfying, and if for some reason you´re into the game fantasy it´ll probably double the fun!
Posted by Alvaro Vazquez de la Torre at 10:05 AM No comments: