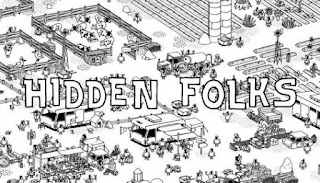 Looks like I can find more time for mobile games than console/PC. Particularly during flights, where you don´t have many leisure options. That´s the case of Hidden Folks

It´s a hidden object game, much like the old "Where is Waldo" books: You´re presented with a gigantic 2D scenario and a list of objects/people to find, along with a hint per each. I presume the biggest challenge for designers was to find the sweet balance between how much info you give to the player, to make it challenging but not impossible

Overall I´d say the game is brilliant in that regard, since I managed to finish all scenarios but one without going to internet walkthroughs. And on that one, I missed only one of the objectives. So all things considered, I´d say the game does well in the difficulty curve

I gotta say I love the visual style. It´s unique, simple, fits the purpose of the game and still has personality. Good work! There are also a shit ton of animations to make the world feel alive, and also whenever the player interacts with the canvas. On the other hand, I think that affected performance negatively, particularly in some of the bigger levels

I think it could have done better regarding rewards: Whenever you find one of the items there is little celebration, nor a list of achievements to make. You just keep going finding more stuff, until the game allows you to move to the next level. They can probably do better in that sense


Posted by Alvaro Vazquez de la Torre at 9:22 AM No comments: