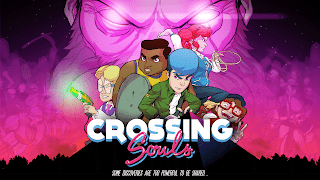 Crossing souls is an indie title developed by a small team in Seville (Spain). It combines several elements that make me want to purchase a game: Set in the 80s, featuring a group of teenagers (Goonies?), an indie developer, Spanish and cheap. So I decided to give it a try. I don´t repent it since they did more good things than bad. However there are some caveats for anyone tempted to buy it

Let´s start with the good things: The visual style is charming (a combination of pixel art and 80s cartoons), you get a lot of content for your money, the game mechanics principles are good (you can swap characters at will, each has some unique ability that forces you to use them all in not-too-difficult puzzles and exploration), and the spirit of those 80s teenage movies is well-represented (particularly at the beginning)

There were some things I found detrimental for the final quality: Even though the game only has 8 chapters, some felt as unnecessary padded. They didn´t help progress the story, characters or gameplay, it was more like "well, we need one more hour of gameplay so let´s get the player get lost in the woods for some time"

Also mixed feelings about the story: It starts very promising, homaging some movies I cherrish from my childhood and including plenty of pop references. But at some point they put all the focus on some (imho) not-needed Egyptian mysticism that only distances the player from believability, and loses touch from the world logic. This problem of stories that get crazy at the end happens from time to time in teams lead by story-crazy directors (maybe this was the case?), I call it the "Indigo prophecy" effect (if you played that game, you know what I´m talking about)

And one final thing: For a collectible aficionado such as myself, I found inexcusable the lack of replayability options when you finish. If you didn´t find all hidden secrets you need to start over again (not even sure if the ones I found are saved to your profile, even)

I believe this is the first game done by the team. If so, I think it´s very promising and I personally recomment it if you´re attracted to any of the elements I mentioned above. For future titles I hope they learned some lessons and I´m sure they´ll be able to achieve something remarkable

Posted by Alvaro Vazquez de la Torre at 9:59 AM No comments: