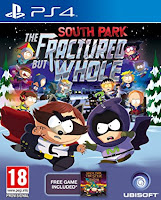 Just finished South Park Fractured but whole, and I honestly didn´t expect to enjoy it so much. The previous South Park game was good, but the sequel has managed to fix some minor gameplay inconsistencies to the point of making it really addictive (at least for me)

I think the biggest improvement has been the short-term challenges. Much like the previous game, the world extension is limited but packed with small content in form of collectibles. This time those are linked to character progression or crafting, as opposed to achievements. Also they seem to be everywhere. In addition to that mini-puzzles are common. As a consequence you always have that feeling of "ey, just 5 more minutes so I can check out that corner"

The combat system has been expanded to support movement on a 2D grid. It´s a good addition but the camera is a bit too low so sometimes you miss some combat perspective, and AoE abilities are a bit underpowered. Overall it works perfectly fine, though. If you add the minigames, exploration and puzzles you´ve got all the game scope. It´s well balanced and keeps the humor and visual style from the first game and series.  The story insists on making you meet all possible characters because of reasons, but it´s interesting nevertheless

I liked it so much that I not only completed the game but also got the platinum trophy. That was another nice improvement from the other game: This time you can unlock them when you´re free roaming after the main story. Good game!

Having played the previous 2 games, and since I got it almost for free, it was always an option to complete the trilogy at some point. To be honest I wasn´t hyped on it because I favor 10-12 hour games, but I´d heard a lot of buzz about the ending (surprisingly I managed to avoid spoilers) so I thought it was time to end the “Shepard cycle”

On the plus side the classic sci-fi elements are all there: Worlds to explore, fascinating alien cultures, human kind in distress... The RPG and combat aspects didn´t change much from previous titles so they´re still solid, and the story was reasonably compelling. Good achievement design, also, since you can complete some of them either in single or multiplayer

On the minus side the mission journal was openly misleading, animation bugs were common in the cutscenes, the level design is as repetitive as the previous games and I found difficult to believe all the “take your time” situations the game allows while you´re supposed to be working against the clock to save the galaxy

If you like the Bioware-type of games, RPGs in general or sci-fi games you should enjoy it. If not be aware you´ll be required to spend 30-40 hours to see that debated ending (which I liked, by the way :D)
Posted by Alvaro Vazquez de la Torre at 1:28 PM No comments: