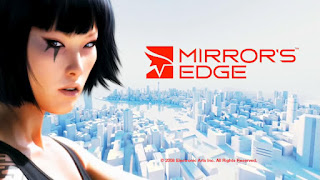 God bless the Steam summer sales. You get great games for almost nothing. I bought 7 for around 30 euros altogether.

And as usual, any game I buy I try to finish it. First one has been Mirror´s Edge. I played the Xbox demo 4 years ago and although I liked the visual style it was too difficult so I passed. But in PC is easier, so I gave it a try.

Mixed feelings. On the plus side it´s visually unique, the controls become second nature relatively soon, you do have the feeling of being a parkour artist and often suffer vertigo when jumping from roof to roof. I always value when you try to make something different, and for the most part Mirror´s Edge achieve it.

On the minus side the story is weak and predictible, the supposedly oppressive city and subjugated citizens look extremely bright and optimistic and you miss some variation on gameplay, since it´s always jumping and more jumping. Some additional game modes would have been appreaciated as well.

I recommend the title (not so much the iOS version) as long as you like puzzles and platforming. Too bad EA announced that it was not planned to continue the IP, I suspect a sequel would be much better.
Posted by Alvaro Vazquez de la Torre at 3:17 AM No comments: