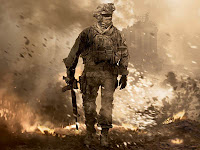 Now that I’m back on the saddle, I’m trying to finish all those games that were released while I was writing the novel, and I didn’t have the time to play. The first is CoD Modern Warfare 2.

Mixed feelings about it. On the plus side the level design is as good as ever, I appreciate the variety of graphic themes along the game, great animations and small unique mechanics associated to specific situations.

On the minus side the plot is simply unbelievable, too many odd-planned combat situations with enemies coming from behind, and frequent ‘real war situations’ were you are surrounded by enemies in a strange environment were you are uncertain where to go.

Also, the game can be completed within 6-7 hours. Great hours, for sure, but not too many. I seriously doubt I’ll play the co-op campaing, and I’ll take a look at the multiplayer but not in depth. I wish I would have been given the chance to buy just the singleplayer campaign for a reduced price.

The game is definitively worth the money I paid for it, but I think it’s an 8 or 8.5, tops.
Posted by Alvaro Vazquez de la Torre at 2:26 AM 2 comments:

Well, I’ve just completed the hardest part of writing my novel, so I’m coming back to videogame business. I’m updating my online status in Linkedin and other sites so headhunters know I’m looking for a job.

My ideal company would be one with a portfolio of games (no more start-up companies for me), the ability to release games on a regular basis (no more Pyro-like companies, who can spend 5 years without releasing a game), international (no more spanish managers. No sir) and a nice atmosphere. Let’s see what I can find and who wants me in. I’ll keep you updated.
Posted by Alvaro Vazquez de la Torre at 12:58 AM 4 comments: