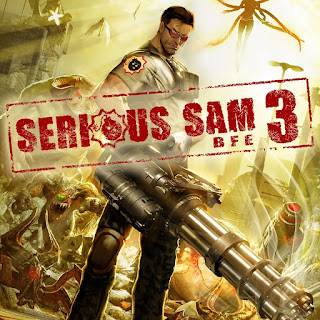 I´ve had Serious Sam 3 installed in my PS3 for - easily - 6 years. Not 100% sure but it was probably free on Playstation Plus, thought I could give a try, played 2-3 hours, got bored and let it rot. It has been a major inconvenient because the console´s HD is limited, and I´ve never been able to store more than 3 games simultaneously. I should´ve deleted it a long ago... but I have a closure problem

And that´s the reason why I decided to finish it now. Since the PS5 is out, the PS3 will be discontinued in a couple of years. Multiplayer modes won´t be available, trophies un-obtainable anymore... So I thought let´s get rid of SS3 once and for all, even if it´s not my cup of tea. And it is not, its gameplay is simplistic and out of date. But funny enough, that might be the reason why it can be very interesting for today´s audiences

Although the starting point for all of them were common (Doom/Quake -> Shoot monsters mindlessly), for some years now shooters have evolved to become more and more immersive, make players feel like they are some combatant type: Military (CoD, MoH), space soldier (Halo), secret agents, etc. Serious Sam is an IP which based its gameplay on pure craziness: Big weapons, weird monsters, dozens of them, all coming for you, shoot-kill-repeat. And they stuck to their guns (pun intended) while others went into the simulator experience. That´s why it kinda feels fresh, because they haven´t evolved at all, and now their approach feels truly one-of-a-kind

Aside from this unique advantage, the game plays well, the weapons are satisfying and the MP was probably fun to play (the servers are deserted today). On the minus side, it was visually poor already at the time, the game is very limited in mechanics and surprises, you can sometimes get lost in the levels and the story is not only absurd but also an uninspired Duke Nukem rip-off (which in turns is also an 80s testosterone movie - not always funny - parody)

Nevertheless it is not a bad experience, just old fashioned. I wouldn´t be surprised if there are fans out there, but I think I´ve had enough of the IP for another 6 years. Or more