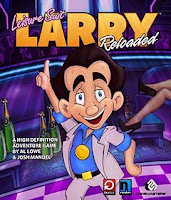 This is probably the first kickstarter project I funded, like 2 years ago. It's all about nostalgia, since Leisure suit Larry in the land of lounge lizards was one of the first games I played in that PC I inherited from my cousin Pedro. It was one of those old school graphic adventures using a word parser to interact with the game, extremely punishing if you failed and double difficult if you weren't a native English speaker.

It has taken me a little more than 3 hours to finish it now. In terms of quality looks like a flash game, but it's still enjoyable and they've barely expanded it, it's essentially the same game of 20 years ago.

I wouldn't recommend it unless you're a die hard fan of the series, but I'm happy with my contribution to the project. I really think Kickstarter iniciatives can make a different in the videogame scene!
Posted by Alvaro Vazquez de la Torre at 1:20 PM No comments: 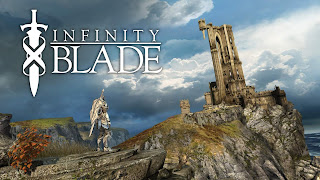 Just finished Infinity Blade (iOS). Such an intelligent design! I first knew about it 2 years ago while working at Digital Legends, tried and hated it since I didn't play the tutorial. But some months ago it became free for one day and I decided to give it a try since so many people praised it.

And they were right! It's one of the smartest designs I've seen in years. As far as I know it was conceived to showcase the Unreal engine's possibilities for mobile devices, and it certainly does. First of all the controls are extremely well adapted to the touch screen. The whole combat system relies on it (dodge enemy attacks, depending on how many you perform the enemy will be more or less open to sword swings - Once again performed through tactile input).

But once again the main focus seemed to be the visuala. They wanted to show impressive characters and scenarios, but since the iPhone has a good number of limitations, they adapted the design to it: The number of enemy characters is limited, and they all share pretty much the same animation sets. Camera always focus on them so scenarios don't need to be super-detailed (only in the go-between cutscenes) and actually the list is not particularly impressive. But they conceived the game to be replayed over and over based on a final challenge which is the real hanger.

You start the game confronting the final boss, who's actually the tutorial level. He kicks your ass bad (he's lvl 50) and forces you to replay the game over and over, always fighting the same boss and always being defeated. However in the process you level your character and get better gear, making every attempt a little closer to success.

There is an intelligent microtransaction system, allowing you to ease the process and get faster to better equipment. I took me 7 lineages (playthroughs) to beat the boss, at lvl 22. Should have been possible earlier, I suspect. On the minus side the game can become repetitive unless you're 'hooked' with the challenge, and there is no story of any kind.

Anyway, I recommend it for all type of players (maybe a little more for hardcores) and particularly anybody interested in videogame design. A great example of adapting the design of the final project goals, and making something really entertaining.
Posted by Alvaro Vazquez de la Torre at 4:07 PM No comments: