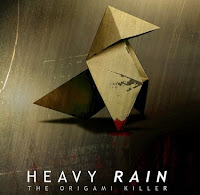 And another game bites the dust. This time Heavy Rain. The gameplay is kind of unique, since it’s totally based on the story. In order to progress along the plot, you need to perform constant and mostly repetitive Quick Time Events, and that’s pretty much all you can do aside from some exploration.

On the minus side, the character storylines are constantly cheating the player, since they perform certain actions that are inconsistent with their final true nature. Also, the developers made an effort to make them all look suspicious (the story is essentially a whodunit) and eventually many aspects of their actions remain unsolved.

Apart from this, I’m missing the player’s actions to be more relevant. Changing diapers is not particularly epic. Also, Jayden’s investigation gameplay seems completely out of key for its Science-Fiction look, the loading screens appear to be bugged when combined with the Trophees, and the letter font of the game is far too small.

On the plus side, I like when game developers take a chance on something new and risky, and Heavy Rain is a not-that-common experience. It’s heavily based on the story, which means the interaction is limited, but I’m ok with that as long as the plot is not shitty. And it is not. Ok, it’s not as original or engaging as an average movie can be, but for a videogame is rare to see. The difficulty level is well adjusted, and the quality of the characters and animations is remarkable.

So I’d say if you’re interested on videogame storytelling, Heavy Rain is a must-see. If not, then you should probably look for something else.
Posted by Alvaro Vazquez de la Torre at 9:53 AM No comments: