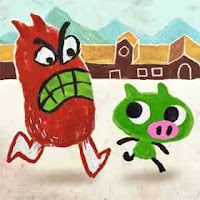 Gensundheit is an iOS puzzle game. You control a tiny creature with the ability of throwing snot away. The objective of each level is to lure monsters into traps, and optionally collect some objects (stars) present on the scenario. Monsters are attracted to mucus, so you need to control their movements so they fall into traps. If they see you instead they´ll eat you alive.

Released by Konami, I downloaded it months ago due to some good reviews. The game is compelling and has a certain unique mix of moods: Comedy and kid´s nightmare. The basic ability works fine and there are a couple of interesting iterations along the game. Obtaining the 3 stars is really difficult in some levels, and the overall challenge is acceptable. Not many levels, though, but enough.

I seem to be attracted by mechanics based on controlling AI actors. I´ve not only created some designs about it (see The Friendmaker here)but also I like that in games. Interesting, isn´t it?
Posted by Alvaro Vazquez de la Torre at 7:19 AM No comments: