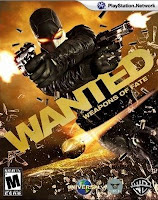 Update (6.12.09): I've just been contacted by one of the managers at Grin BCN, claiming that the main reason for the studio having problems is not Wanted. Anyway, my sympathies are with the hard-working people there who are about to lose their jobs. Good luck, guys.
Posted by Alvaro Vazquez de la Torre at 5:25 AM No comments: