I found this interesting article about how the '10 minutes rule' could be applied to videogames.

Although the writer puts much effort to show how to do it from a narrative prospective, I think you can achieve the same results using gameplay mechanics: Showing some of your best gameplay features at the beginning, or simply creating an outstanding level design situation that makes the player feel 'Wow! I gotta keep playing this!'.

But anyway I do think you need a 'hook' at the beginning of the game or demo. Otherwise, considering the amount of leisure offerings that a standard user has everyday, he'll downgrade your product from the 'Must to' to the 'If I have free time...' and you're screwed.
Posted by Alvaro Vazquez de la Torre at 9:06 AM No comments:

PROFESSOR LAYTON AND THE UNWOUND FUTURE

I've just finished the latest of the Professor Layton series: The Unwound Future. Although I briefly played the others, I found this one much more emotionally touching, and that's why I decided to complete it.

The gameplay is just the same: The plot leads the player through different brain teasers. Solving them allows you to advance towards the next chapter. However in The Unwound Future for the first time the main characters seem to have some depth (we're introduced to Layton's former girlfriend, and Luke is sorry because he has to leave Layton). Also, the initial hook (the time machine and its failure) is much more interesting than those from the other games.

The title also features some extra non-plot-related puzzles you can solve independently, and the production values are higher compared with previous games (lots of cutscenes!). All things considered, I had that nice feeling of playing a game that is worth much more money than the one I actually spent. And that's always great.
Posted by Alvaro Vazquez de la Torre at 11:15 AM No comments:

THE CURSE OF OLD DESIGNS 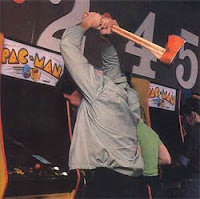 While watching Richard Bartle’s lecture in the GDC online, I came to think how many game mechanics and design features are here just because no one has thought of changing them since the beginning of videogames. It’s just easier to repeat them over and over.

Bartle uses his experience as the designer of the first MUD (the grandfather of the current MMOs) to highlight how certain decisions they made back in the seventies have been re-used by designers without really asking themselves: Why not do something different?

Bartle remembers how they modelled the game world using English folklore with the today overused dwarves, elves, etc. They also implemented leveling and the beginning of the holy combat trinity (Tank-Healer-Dps). Since then, we’ve seen that formula repeated over and over without much questioning.

But there are many others, most inherited from the design of arcade games:

- Start screen: It was the ‘Insert Coin’ screen in the arcade games. It was useful because it featured a nice loop of game footage to attract gamers. Today most games don’t need it at all. Some single player games have even removed it completely, and they load the last saved game as soon as you put the disk into the console.

- Game length: I recalled this point while reading about one of the most interesting features of LMNO, the failed Spielberg project for EA. They tried to create a 2-3 hours long game, with lots of replayability. Why games must be 10 hours long? I’ve been playing Professor Layton and the Unwound Future lately and the game has obviously been stretched to make it longer, despite the fact the plot stopped being interested hours ago.

- The use of Lives: Back in the old times you bought Lives with your coin. Every extra coin granted a fixed number of Lives. Today is not really needed. In fact most games allow players to revive endlessly. They paid for the whole game, after all.

- Old RPG parameters: Why on earth every RPG game needs to be based on AD&D parameters (dexterity, stamina, etc)? They are confusing, mathy and takes hours to master. Roleplay is based on immersion and stories, not on using the calculator everytime you acquire a new item.
Posted by Alvaro Vazquez de la Torre at 3:39 AM No comments: