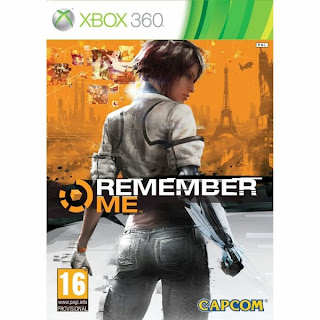 Ok, I don't get it. Like a week ago I finished Remember me (thanks to Ramon, who lent me his copy) and my overall impression is fairly good. But for some reason it has a 70 in metacritics. I'm quite sure it should be along the lines of 80. I fail to understand critics on this. WTF?

Let's start with visuals: The art direction is elegant and sophisticated. I've always liked the french SF since the times of Once upon a time... Space. The game world is believable although a little empty. Interesting in any sense. Animations are smooth and well integrated in the combat system, and characters are reasonably good for this generation.

Game mechanics are very decent: The game pivots onto 3 major elements - combat, platforming and 'memory alterations' (in absence of a better name). Combat is fluid and engaging, basically the system used in Batman Arkham asylum but adding an extra layer of complexity allowing users to customize the combos. There is a nice variety of enemies (I believe around 20) which is more than enough to fill up the encounters.

Platforming may be the weakest of the systems since it's a direct rip off from Uncharted. Still works fine although often lacks challenge. Memory alterations are interactive cinematics where you can switch on/off certain elements to alter the outcome. Works perfectly well as a unique selling point, although there aren't many.

There are also some supporting mechanics such as collectables, bosses and chase sequences that add some spice to the result. In summary, a mature design work and a good product. If any, the story is confusing and the memory theme is too present in the world to the verge of unbelievability. But I've seen worse stories in other games and they ranked higher.

So again, I think the ratings have punished this game under its true value. Hope the sales were good, at least.

You learn so much more from bad games than from good ones... I just finished Aliens Colonial Marines and it's amazing how many lessons on game design you get about how to NOT do things from games like these.

First thing to say is it could have been a good game: The Aliens franchise has lots of potential, very gamey (particularly for shooters), and the number of game modes and mechanics are sufficient. Problem is they screwed it up. You can take a look at a summary of the problems they had on this article.

First the game systems: None of them are really new. All weapons are copied from other games, no unique player skills nor the enemy AI is particularly outstanding. If any, really prone to glitches. Despite the little activity the game has, I managed to play some MP rounds and although playing as an alien is always fun, the only game mode with players available was nothing new to me. In summary, not impressive on this side.

Then the story: They had the actors behind Hicks and Bishop on the original Aliens movie, but they're scarcely used. The plot in general has empty characters and lacks player motivation. The story in general offers nothing new to the franchise, and actually has a turn of events with the inclusion of mercenaries that I'm not totally sure fits with the IP mood.

Even with all this, the game could be a just a forgettable one, but not THAT bad. However it currently ranks 43-48 in Metacritics. That means is really poor. What happened? I think the main problems were:

Press felt betrayed: The demo they sent to E3 looked awesome, but due to performance adjustments the game never looked that good. That pissed off some journalists, who took their revenge on the ratings. This says little of the professionality of reviewers, but I've seen this happening in the past (Bionic Commando)

Glitches: But actually the press was right to give poor ratings to the game, mainly due to AI glitches and lack of art polish. It's common to see team mates teleporting, aliens stuck on environment, poor animations and ragdolls and extremely simple environments.

Funny thing is, player and reviewers can forgive a number of minor mistakes if the game has some good unique selling points. If the art would have been amazing, or there were some really compelling systems I think the glitches would have been overlooked much more, and the game would have been around the 60s in metacritics. But probably due to lack of time they had to cut down on risks (creating new gameplay always takes time) and polish, and the title is now widely considered as a synonym of a bad game.


Posted by Alvaro Vazquez de la Torre at 10:59 AM No comments: