THE LEGEND OF ZELDA: TWILIGHT PRINCESS

After 4 years, I finally finished Twilight Princess. I bought the game when the Wii was released, and I was determined to make it the first Zelda I completed. I was wrong. The game was not interesting enough for me, and I abandoned it for a long time.

But I have this policy that every game I buy I finish, so after completing 2 Zeldas (those two released for the DS), I decided it was time. I had not played for 4 years, but my save game was still there. It took me 55 hours, I think it's the longest Zelda so far, and not exactly worth it. It's not a bad game, but it lacks something. I've checked with some Zelda hardcore fans and they can't define what the game it's missing. The most common accusation was 'it doesn't have charm'.

The game it's not cute, I guess that's what they mean. It's slightly dark and realistic (although graphically it's no more good than a PS2 game). However I didn't enjoy it mostly because of the Zelda gameplay itself, common to other games: The gameplay is too based on puzzles, and there is only one possible solution to any of them. Too many times it's not the most logical solution but one the designer thought it would be cool. I don't have the patience or the time to spend a whole afternoon figuring out what they had in mind when they created the dungeon, so I had to check internet walkthroughs VERY often. No, I don't find any joy in finding the solution by myself after 4 hours.

Aside from that, I think Zelda's design (and particularly Twilight Princess) is out of date. Supporting mechanics such as saving, health, interfaces, lack of achievements and multiplayer makes me think the series could really use a serious revamp in the following titles. I doubt they will, anyway, and it's a pity.
Posted by Alvaro Vazquez de la Torre at 2:59 PM No comments:

Just a few lines to let people know that I was recently requested to write an article for Videoshock. Apparently they want to make a series from industry professionals, talking about their favourite classic games. Mine was The secret of Monkey island. The most important idea I expressed in the article was...

Look, a three-headed monkey just behind you!!!!
Posted by Alvaro Vazquez de la Torre at 8:34 AM No comments:

At last, I completed Braid. Like 3 years ago I loved the demo in Xbox, and I promised myself to buy it, which I never did. Recently Barkley bought for Lucas and me the humble bundle, and Braid was included, so I decided this was the time to play it.

My initial feeling about the game was extremely positive. The main mechanic was fresh, there were interesting iterations in each level and the visuals were unique. However, now that I've experienced the whole game I think some of the puzzles are too obscure (this often happens in the puzzle genre), too skill-based and the story (if like to call it that way) is a bad attempt of an amateur storyteller.

Anyway, it's definitively worth to buy it if you didn't. It's not the GotY as I initially thought, but the best indie game that I've seen so far. And now that I come to think about it, the first indie game I ever complete, I think.
Posted by Alvaro Vazquez de la Torre at 3:27 PM No comments:

Well, I just finished Duke Nukem Forever. I had to wait 'till I came back to Cordoba to play the final levels, since I don't have a computer in Barcelona, only my laptop.

Anyway, it's not a memorable game. Not even great. But it's not the piece of shit that most journalist insist it is. It currently ranks really low in metacritics, and I think that's unfair. Although the graphics in some levels are out of date, it's not particularly rich in animations and the story (as could be expected) sucks, the level design is good, the weapons are enjoyable, the length and additional features (multiplayer, unlockable items, achievements) are appropriate and my overall feeling is that it deserves the money I payed for it. Furthermore, if you like Duke's politically incorrect humor, you may even like the game.

Then why all that bad press? Can't say, but my gut feeling is videogame press is far too often a victim of hype. Any game with 'Call of duty' before a number receives automatically ratings over 90, no matter how repetitive the formula may be. Not to mention Halo series, the hypest game in history.

So I wouldn't recommend Duke Nukem Forever unless you dig his main character and humor, but considering the game was so close in so many occasions to be canceled, getting to gold is an outstanding achievement for the guys at Gearbox. Well done!
Posted by Alvaro Vazquez de la Torre at 4:32 PM No comments: 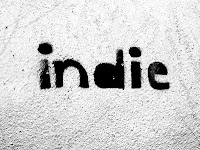 Not sure if I already mentioned, but I think the videogame industry is currently in a unique moment, regarding the indie scene. Back in the 80s 1-2 developers could create a game and get money and credit for it.

But now, and thanks first to PC and later to Microsoft, a single developer or a small group of them can create a game, be innovative and get profit and recognizement out of it. There are several channels you can use to make your game public (Steam, XLIG, XBLA and more to come) and the indie scene is quite active. Granted, there are still visibility problems and good marketing is a pending task, but anyway is promising.

From my side I'm proud of being a small actor on the spanish indie scene. I also suspect indies will play a much more important role in the upcoming console generation. We'll see.
Posted by Alvaro Vazquez de la Torre at 5:11 AM No comments: