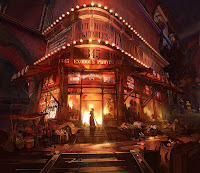 I didn't know about it but seems like the Academy of interactive arts & sciences has like a hall of fame for concept art images. They've just added some more to the list. You can see them here.

I've always liked good concept art. They help at an early stage to understand what the game will be in a future. And some of them expand your gameplay ideas with potential features or feelings.

Also, at a certain extent, I think there is more creativity and hard work in videogame concept art than in most painters I've seen in Arco or some museums.
Posted by Alvaro Vazquez de la Torre at 2:22 PM No comments:

Ok, after 3 years I finally completed the last levels of Super Mario Galaxy. Why did I wait so much? Didn't I like it? On the opposite, I consider the game one of the finest design of history and the level design is incredibly creative. There are tons of lessons to learn in that game.

Then why took me so much to finish the game? Well, I think it's because the story sucks. Like all Mario games, the plot involves princess peach being kidnapped by Bowser, and Mario going level after level after her, only to hear 'Well done, Mario. But the princess is not in this castle'.

Oh, there is a nice story in the game, the only involving Mom, that blonde girl who adopted the little stars. Small pieces of her story are provided as rewards, and the final story has a certain flavor close to The Little Prince. Although small, I liked it.

But no, from a story point of view the game is poor. As a consequence, I never felt compelled by the characters or the storyline. While I was not playing the game I knew Mario was not having a hard time. As the matter a fact he smiled all along the adventure. Is he some type of sadist who enjoys thinking about her girl's suffering? Or is he a sociopath? Maybe gay? Who knows.

The thing is Super Mario Galaxy is completely focused on gameplay, and excels on it. But I need a story to make me go back to a game. Is it possible for a videogame to be too focus on gameplay?
Posted by Alvaro Vazquez de la Torre at 1:12 PM No comments: