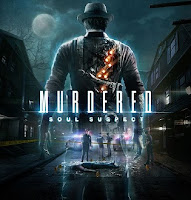 Years ago I had this idea for a game: You start as a ghost. Your body is on the ground, you were assassinated minutes ago. A number of friends/relatives surround the corpse. You don´t know which, but one of them killed you. They all leave the scene and from that moment you start an investigation to find who of them murdered you. It would have been a game about talking to other ghosts with unfinished businesses, unlock new areas and puzzles using paranormal powers: Possession, telekynesis, etc. I also had a fairly good final story twist

Never got the chance to pitch it, though. Then I found Murdered soul suspect, which plot is surprisingly similar to what I had in mind. I got it reasonably cheap at Steam, played a bit but left it for other games for 2 years. Only recently I decided to finish it - and even did all the achievements

It holds a 51-59 in metacritics, and I fail to understand why. User rating is around 70, which sounds about right. Admittedly gameplay is not mainstream, it´s all about investigation and collectibles. And you can probably finish the game in 4-5 hours if you focus on the main missions. But still if you dig that type of experiences (there aren´t so many investigation games in the market, after all) it´s very enjoyable and the plot is reasonably good. And the setting feels very fresh to me

I personally recommend it to anybody who likes detective stories / gameplay, or collectibles (there is a gazillion of items to find). Critics were unfair with this game, I believe
Posted by Alvaro Vazquez de la Torre at 1:25 PM No comments: