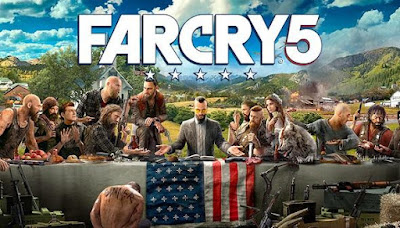 Wow, more than 15 years since I played Far Cry 1 (Crytek). Since then, the IP went to Ubisoft, I played the Far Cry 2 demo – didn´t like it – then ignored the saga until this last one came out

Why Far Cry 5 in particular? I was mostly intrigued by the game world – a USA county controlled by a doomsday cult. Not only because it resonated on me as an allegory of the Trump administration, but also because it´s unusually daring for a game to set such violent franchise in a real and “civilized” country (those are usually set on fictional third world nations)

Anyway, the IP has evolved since the Crytek times. Now it´s an open world – quite typical on Ubisoft – but retains some of the original characteristics: First person camera at all times (even when driving) to promote immersion, some emergent gameplay and the possibility to approach challenges in multiple ways. It adds some Ubisoft-flavored elements, such as lots of player tools (weapons, skills, team mates, customization, etc) and a bigger focus on storytelling

Overall it plays well, and sells the fantasy. The shooting is satisfying, the villains are iconic, the world is believable and full of content. On the other side - as most Ubisoft games - the missions are mostly template repetitions, priority C bugs are not uncommon and I don´t think all systems work together smoothly: Sometimes you die not knowing really why, team mates often make weird decisions on certain situations and it´s not uncommon to feel unfairly treated by subsystems working together leading to unexpected outcomes. Special mention to the death cam, a 10 years old ragdoll I am surprised they kept in the game

One good thing in general of Ubisoft games is that the game is not particularly difficult, the challenge is normally on finishing all content instead. I personally recommend Far Cry 5 if you like FPS open worlds and get immersed in an interesting setting

Posted by Alvaro Vazquez de la Torre at 11:12 AM No comments: