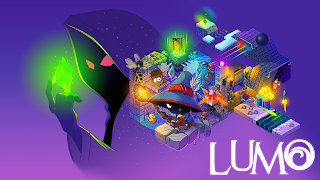 One of my favorite games of all times is an isometric platformer (either Knight Lore or Head over Heels, not totally sure). Not because I still like to play them but because the fascination created on the teen me by those rooms full of secrets and the fake 3D effect

Partially out of nostalgia I purchased Lumo, another isometric platformer but a modern one released in 2016. I was somehow disappointed: Not by the game per se - which is actually a fair attempt to revive that genre´s glory - but because it stroke me with some huge issues those old games had and was never conscious of

Back in the 80s your perception of gameplay was different: You would normally assume the game was perfectly designed and balanced, and if you had problems progressing it was YOUR fault. That´s why a couple of issues inherent to isometric view vs platforming were not obvious to me:

The first one is the uncertainty about your character´s position. The camera angle doesn´t give you a good reference of the distance against (commonly deadly) world objects. This is even worst when mid-air, when your shadow disappears in most surfaces. Dying is common because of this

Lumo is affected by this as well. Platforming involves a lot of dying. Gameplay works fine when you have to move objects around the room or you have second chances, other than that you die a lot. It´s not too frustrating since you immediately respawn almost in the same spot, but it´s not for everybody´s taste

The second issue I noticed are framerate problems. In my MSX times I remember the performance of most games changed dramatically depending on the room you were. I never thought it could be done differently. Today I know the game was not optimized enough

Lumo´s framerate performance often drops for no good reason as well. Some big rooms with several enemies and particles run smoothly while some other small ones are almost unplayable. Seemed to happen randomly at different game sessions, which makes me think the game wasn´t bugfixed properly

Aside from the above, the game is enjoyable and offers a bunch of nostalgia references. Menus are sketchy and I could have used an option to "select chapters" enabling achievement hunters, but the overall game structure is solid and generally flows naturally to the next unexplored area. Since I tried some achievements while progressing I might have died more than I should, and in any case is not a long game. I believe it was done mainly by one guy only, which has A LOT of merit

In short, if you are missing those good old Filmation-style 8bit games, Lumo will give you the chance to have a good time
Posted by Alvaro Vazquez de la Torre at 3:10 AM No comments: 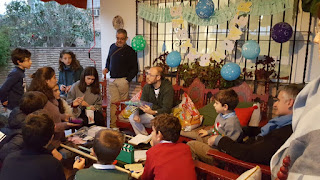 As every year in my family gathering, I organize a group activity for my nephews. It was originally a kind of gymkhana, then transitioned into a treasure hunt

However this year I tried something different, because I wasn´t sure if the weather would be favorable, and secondly because hiding the clues for the treasure hunt was a lot of work and the kids fully expected that to a point they looked for them hours before the event started

So I tried a small competition on a series of challenges: I asked for a couple of captains (generally the older ones), gave them a recap of the trials and asked them to choose teams among the rest of kids, and assign one “champion” per challenge. That would make the teams root for/against, and keep them interested

The trials themselves were easier to arrange than other years: Some were simplified versions of board games (Trivial, Pictionary, Brainstorming) or well-known party games such as the balloon race or beer pong. Every challenge rewarded a number of tokens to the team

By the end, each team had around 90 tokens. Somehow it balanced it itself, although I´ll admit some trials gave much more benefits than others. I asked them to participate in an auction, so they would bet on the gifts I had bought. I prefer this approach to just assign prices to each present, since an auction prevents “exploits” – I can see some gifts being too cheap or expensive when confronted to the kid´s real interests

One additional challenge every year is to update the rewards, since the kids are growing up and most of them are too old for child games. But if you tempt them with gift cards or apple/android credit then the interest increases. This year I gave them both Carrefour and Game credit, as well as mobile phone money

It went well, although there wasn´t much excitement for being a captain in the first place, and some trials/rewards were unbalanced. Also a bunch of gifts didn´t get much attention so I saved them for next year. But ey, it´s about kids having fun, so mission accomplished
Posted by Alvaro Vazquez de la Torre at 4:03 AM No comments: