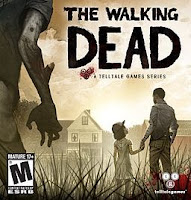 Yesterday I finished The Walking Dead, the videogame released episodically. I decided to buy it months ago due to the good reviews and a Steam offer, and I don't regret it at all. In terms in storytelling is the most compelling game I´ve played so far, if memory serves.

This leads me to think about a common mistake within the videogame industry: Most people praise games as good in storytelling because they look and feel like movies (i.e. Uncharted). But we often forget stories are about creating feelings. And although you certainly feel the thrill on Nathan Drake´s adventures, it´s generally because of the level design challenges not because he's betrayed by another character (they do a lot, Nathan should really start checking out his acquaintance's intentions beforehand).

Truth is The Walking Dead often navigates between the shores of interactivity and CGI movies. The gameplay pivots around a limit number of scenarios: Environmental puzzles (grab this and use it there, generally super-simple), dialogue puzzles (talk to X team members to unlock the next scene), pure QTEs of button smashing (generally Q+E) and occasional shooting galleries really limited in time. That´s really it. The rest is dialogues, character build-ups and some decisions to be made (sometimes deciding who lives and who dies) that at the end of the day are not really meaningful since the story will continue just the same only with different actors.

But the strength is on the characters. The relationship between Lee and Clementine, and how you feel compelled to protect her is superb. She´s not one of those stupid kids from Spielberg movies who always screw it up but you're supposed to forgive them because they're lovable. These are all stories about survivors and how they struggle to stay alive in a world dominated by zombies. And by god those are tragic stories. Most of the characters die one way or another.

On the minus side, animations often betray the overall result with lack of sync or simply being poor. But you generally forgive the game since the rest is well balanced and interesting.

So if you're interested in well-crafted stories in a videogame, I strongly recommend to give a try to at least the first episode. I suspect you won´t regret it.

Posted by Alvaro Vazquez de la Torre at 4:17 AM No comments:

I got XCOM Enemy Unknown for free (thanks to the Bioshock Infinite pre-order offer) and gave it a try one night... and couldn´t stop playing.

Funny thing is, the basic gameplay seems to have been directly copied from the original XCOM from 1994. I played it for a while but I remember it was extremely punishing and couldn´t finish it. This reboot is practically the same, although with better graphics. Still I had to try 3 times to make it till the end. The golden path of the game is really narrow, and if you don´t make the proper calls early at the beginning you´ll be screwed the rest of the game.

But the playability works incredibly well. Each combat scenario takes 30-40 min to be completed, allowing to adapt your playtime to any personal circumstance. You´ve got plenty of options to customize your base and squad members, and during combat you've got a semi-random element whenever you shoot at an alien that always makes you wonder if you´ll be lucky or not. I admit I played with the saving system (whenever I failed a mission I´d reload the save) so my soldiers would achieve the highest rank as soon as possible. Otherwise the game was too punishing.

Anyway, I strongly recommend it. Although there are plenty of animation / camera bugs, and sometimes the shot success / fail calculations are inappropriate, the overall result is amazingly engaging, the story serves its purpose nicely and the gameplay works like a charm.
Posted by Alvaro Vazquez de la Torre at 4:57 AM No comments: