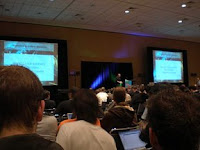 I had never attended to any previous GDC before, and I didn't have the intention to do so this year. I had taken a look at the speakers and it didn't look particularly interesting. However, my company manager told a group of employees (including me) that they'll pay us the trip, the hotel and the GDC registration. As the Godfather would say, it was an offer I couldn't refuse.

The convention took place in San Francisco's Moscone center. Nice place in the city downtown. For those who never attended, the convention features dozens of different conferences, most of them at the same time. So you really need to schedule your attendance heavily in order to be in those you really want to be. As I said, I didn't feel this year's conferences were extremely interesting but anyway there are always some subjects that could be useful for your work.

More than that, we had a problem with the schedule. It was also our intention to meet with our publisher, and so we had a couple of conference-free days for that. However, they put no effort in setting the meetings in those days. So we had to meet them during the sessions. I was attending meetings with my mobile on, and when needed I had to run away to go join the others. Not too professional from Universal's side but ey, they pay our salaries.

My general feeling about the content of the (few) design sessions I could attend was that there were too many 'pajas mentales' (mental masturbations) and few useful day-by-day applicable solutions for designers. Most of the speakers seemed to be more interested in show how cool they were, how many 5-syllabled words they could put in the same sentence, and talk about 'what is design?', 'Are videogames art?' and all that academic shit, more than sharing with us the problems they have and how they solved them.

I would have loved to have the time to talk with people. I'm sure that's the real way to make the conference useful for you but, as I said, we didn't have the time to be at the conference all the time we should have. Anyway, I bought some interesting design books, had a nice experience, had dinner with other spaniards (see the pictures here) and had the chance to see San Francisco again, which is one of my favourite cities.

Not bad in any sense, I think.
Posted by Alvaro Vazquez de la Torre at 4:56 AM

What would you like to see in a GDC conference? Design is always such a fuzzy discipline that it's hard to say something that's specific and relevant at the same time.

I personally found a few interesting AI conferences, and there were a few talks about writing for games that caught my eye. Pure design seems to have taken a back seat, or maybe my focus was somewhere else.

Anyhow, it's a bit sad to see how what used to be a pure development conference turns more and more into a PR event. Speaking of which, did you see the Prototype talk? :-)

As far as I could see, all design conferences were about 2 main topics: Storytelling and the everlasting 'Are games an art?'.

Storytelling is definitively interesting, but is one of those subjects that you can talk for days and find no real conclussion. Besides that I'm more and more into leaving that aspect to game scriptwriters. About the artie topic I spent 3 of my college years talking about art and no one was able even to define what the fuck art is. So I prefer to focus my efforts in things that really deserve my time.

If you ask me what design keynotes I'd like to see well, here are some samples that I would have not miss for anything in the world:

- How to make a proper concept phase
- Different design docs for different projects
- Balancing tools
- I have a new & original game mechanic. How can I make it work? The wonderful and risky world of prototyping.

More could come into my mind, but you get the point.

This was my first GDC so I can't really say if it's too PR. I couldn't attend to the prototype conference, though it was in my list. Our publisher made us his bitch everytime they wanted, and we didn't really attend to all the conferences we wanted. Maybe next year ;)

Aahhh, you want "production" insights. Let's hope no other designers hear of this, you could get a bad name :-)

The whole prototyping thing was one of the main themes two years ago, which I guess includes pretty much all of your points but balancing. Basically the agreement was:
- Don't waste your time with neverending design docs nobody reads anyway
- Build an interactive throw-away prototype asap, to test your design ideas
- All this is easier said than done

If you remember, I wrote about this in Designostic (now Gameto), twice, back in the day. And frankly, I still haven't seen it done properly.

In any case, it's good thinking about those issues. The best design idea in the world is worth nothing if it can't be implemented, in time and budget.

When you say production insights I say 'real life' lectures. :)

And here is an interesting insight about my project, related with your 'Don't waste your time with neverending design docs nobody reads anyway' comment: My studio manager is extremely obsessed with having design docs for everything, even for future proposals as a marketing tool. Keep in mind Grin has no IPs of its own, so we have a client to please, and then docs should be a valuable tool.

I know what you're gonna say next: 'Yep, design docs are ok to be send to the publisher, but they won't read it'. I thought the same when I was forced to compile a GDD for the publisher in no time before a big meeting with them. And you know what? They read it in detail. They had the doc in the meeting, discussing every little feature...