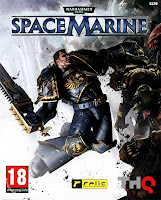 Right after Uncharted 3 I completed Warhammer Space Marine. It´s not a remarkable game but a solid and professional work. Gameplay favors melee combat over ranged through a non-particularly interesting story which otherwise serves its purpose. Graphically it´s not impressive but I´d say it reflects nicely the Warhammer 40k universe.

I´d have to check other posts but I think I´ve stated before average games (i.e. around 70 in metacritics) deserve more attention than videogame media generally offers. Journalists tend to focus only in the 5-6 big titles of the year while you can have lots of fun with non-so-known games. If prices were not the same in both cases, I´d strongly recommend most of these titles.
Posted by Alvaro Vazquez de la Torre at 2:27 PM