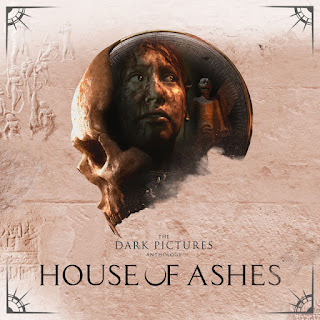 I’ve always enjoyed interactive storytelling. I see it as an evolution from the 90s graphic adventures. That was one of the major reasons why I accepted a job at Quantic Dream some years ago (it didn´t go so well). Aside from the visual values or cinematic values, I like seeing a story unraveling along with your choices

I recently finished The Dark pictures anthology: House of Ashes. It´s the same company that gave us Until Dawn, and it shares some elements with it: A host character setting the mood, premonition collectibles, a tracking page for choices made and the usual structure of gameplay + cinematics of the genre

Looks like Supermassive is trying to evolve within the genre. Maybe using the Dark pictures anthology series as a test case for new possibilities? In House of Ashes, you can try a semi-coop mode where players take turns on characters. Aside from that, I found the setting refreshing: It takes place at Iraq right after the occupation from US forces. The characters are soldiers dragged into what they believe is a subterranean storage of weapons of mass destruction, but turns out to be a Sumerian temple populated by ancient demos. You don´t see recent history events being integrated into games so often

On the minus side interactive stories commonly let me down when I make choices: The game awaits your decision but won´t give you much info on what the consequences will be. As such, you come up with your own background logic that might not align with the game´s ultimate goals. In this case, one of the first cutscenes gives you some clues regarding the character´s personality, and I largely tried to match that during gameplay. Not only that approach doesn´t impact on the endings I aimed for, but also there were some trophies that promoted different patterns, like finishing the game only taking logical choices (normally there are 2 options, heart/logic decisions)

The decision tracking page helps you remember what you did in the past, but doesn´t help you during gameplay since your character goals are basically made up along the way. I wonder if the genre could use something like “internal quests” challenging players to achieve certain goals, to help you refine your choices. And not rely on checking trophy websites to find out what type of decisions have rewards

But I digress. Good game, especially if you like interactive storytelling, unique setting, some thrills and innovations in the genre. Can you ask for more?

Posted by Alvaro Vazquez de la Torre at 11:44 AM