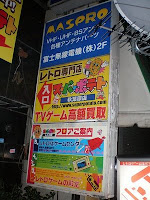 Unfortunately I lost my old MSX, and those were all games in japanese, so I had to control myself and not buy them all. Anyway, it's nice to know those old devices are not dead yet. Someday I'll get an MSX and re-build my old collection of games. Someday...
Posted by Alvaro Vazquez de la Torre at 4:24 AM